Funding of Wisconsin’s public schools was one of the top state issues that helped to elect Governor Tony Evers. Following his election, Gov. Evers Assembled a bipartisan Blue Ribbon Commission with the directive to travel the state to gather input for creating a state public schools education budget proposal. The recommendation by the bipartisan commission to the Governor and the Wisconsin Legislature was to increase school funding by $1.4 billion in the 2019-2020 state budget. The  GOP-controlled Wisconsin Legislature’s Joint Committee on Finance threw out the recommendations in its entirety. The state school funding budget that passed when factoring for inflation resulted in our public schools being funded at a lower amount than in Governor Walker’s last public schools budget, while systematically increasing funding for private voucher school students.

The following data related to Wisconsin school funding 2019-2020 provided by the Wisconsin Department of Public Instruction reinforces this policy shift of using taxpayers’ money to support private school vouchers at the expense of funding our public schools:

This educational policy shift to systematically defund our public schools using our tax dollars to support private school vouchers is being done with without any research to support that it improves student learning and even despite evidence to the contrary:

In addition to the budgetary constraints to Wisconsin’s K-12 public schools created by the funding of private voucher schools, we now have the added budgetary concerns faced by all our Wisconsin School Districts as a result of the COVID 19 pandemic.

For additional information related to funding for public schools, visit the website of the bipartisan Wisconsin Public Education Network. 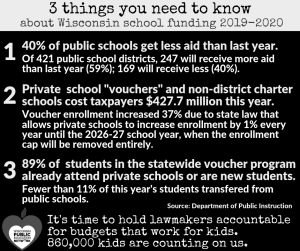 Signup for Our Newsletter!

Get in touch with us at teamgoldwi@gmail.com